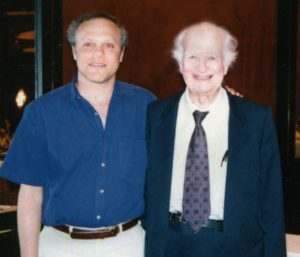 Dr. Gaby with Dr. Linus Pauling, one of the early influences for his work.

I was in a small Midwestern town in 1983, practicing what was starting to be called holistic medicine when I first read an article by Dr. Gaby. I recognized a brilliant mind behind that article. Dr. Gaby was concise. He was direct. He was clever. He was funny. He referenced everything. And he was a wordsmith who made dense, technical material easy to read.

In the 33 years since then, as I have grown to know Alan, I have found him to be a composite of four of my heroes in medicine: Patch Adams, a mischievous clown who has helped to promote a more humanistic and creative approach to our excessively serious healthcare system; Christiane Northrup, a visionary with the ability to eloquently express complex ideas and leading edge concepts; Linus Pauling, a talented scientist who dared to challenge what we “know” to be true and then proposed radical new ways of being and of thinking; and William Osler, a brilliant physician who clearly understood that the majority of healing occurs from within. I believe that Alan Gaby exemplifies the extraordinary gifts of these heroes in his life and in his work.

Over the years, as I have followed Dr. Gaby’s work, my respect, admiration, and gratitude have only grown. His compilations of research have continually given me scientific evidence to corroborate my clinical findings. Something as simple as an elimination diet, for example, can make a substantial difference in helping people recover from significant medical problems.

Although the food we eat is a major contributor to health problems in America, the medical system has been slow to recognize that diet can cause many diseases. Most holistic and integrative physicians whom I have met over the past 30 years, however, report that two of the most important things they do in their medical practice are to encourage patients to eliminate certain foods from their diets and to replace missing vitamins, minerals, enzymes, and other nutrients.

This well-referenced guide details over 400 common and uncommon medical problems and diseases for which dietary modifications, nutritional supplements, and other natural remedies can be helpful. These include arthritis, asthma, high blood pressure, bowel problems, cancer, ear infections, erectile dysfunction, esophageal reflux, heart disease, infertility, migraine headaches, prostate problems, and sinus infections. Most problems encountered in a family practice setting are discussed in this book along with more than 16,000 references to support or refute a nutritional approach. The book allows both practitioners and patients to easily discover if there are nutritional options for treating a particular health concern.

It has taken practitioners of an older generation many years of experimentation, seminars, books, and articles to figure out how to practice nutritional medicine. Now younger practitioners can be spared this prolonged and haphazard course of learning. Dr. Gaby has done a great favor to the next generation of doctors and patients. Instead of everyone having to do his or her own research, he has collated the important nutritional research from the past one hundred years into this superb and informative textbook. Because he has made this information so readable and so useable, I recommend that Nutritional Medicine be on the desk of every healthcare practitioner.

I believe that Nutritional Medicine will stand as one of the foundational cornerstones upon which nutrition becomes a primary treatment modality in the 21st century. Oh, how I wish this book had been available 30 years ago.

“Nutritional Medicine should be on the desk of every healthcare practitioner.”